To celebrate London History Day, we consider the history of two London porcelain manufactories which were established in the mid-18th century.

While Staffordshire eventually became the centre of ceramic production in England, the concentration of skilled craftspeople and potential investors in the city led to the establishment of several porcelain works in London.

The largest London factories were Chelsea and Bow, operating from 1745-1770 and 1744-1776 respectively. Factories were also established along the Thames at Limehouse and Vauxhall, but few pieces remain from these ventures. Unlike European porcelain works such as Meissen and Sèvres that were founded by Royal Charter, both Chelsea and Bow were established by craftsmen and entrepreneurs. They saw a potentially lucrative opportunity to rival European porcelain and East India Company imports from China and Japan. Without Royal patronage, they were more modest in their means. In order to survive, the factories had to become commercially viable and appeal to a broad market. With this ingenuity they produced objects of remarkable quality, continually improved their use of materials and techniques, and gained the admiration of international as well as English collectors.

Both manufactories produced decorative ornamental pieces such as figures, vases, novelty fruit and vegetable forms, as well as functional objects including tea services and tableware. Chelsea broadly catered to wealthier clients with more emphasis on decorative and finely potted pieces, and Bow to middle class customers with a greater proportion of tableware. The manufactories imitated the styles and models of prestigious Meissen pieces, the first Manufactory to produce porcelain in Europe, as well as Chinese and Japanese imports.

In 1744, a group of craftsmen and entrepreneurs founded Bow porcelain manufactory: Edward Heylyn, a Bristol clothier; Thomas Fry, an Irish artist; John Weatherby and John Crowther, glass and ceramic traders; and George Arnold, a wealthy alderman of the City of London who financed the venture.

The site was known as New Canton as, according to one of its early painters, the buildings were based on the Canton English Factory, a trading port in China. The success of the business led to the opening of a warehouse in Cornhill near the Royal Exchange in 1753 (although this closed in 1764), and at its height in the years 1760-1765 it employed about 300 workers. Bow was also successful in the export market, attracting buyers in the American colonies.

The sixth edition of Daniel Defoe’s Tour of Great Britain, published in 1761, gives a description of the manufactory:

Upstream along the Thames river, Chelsea China Manufactory was founded by Huguenot craftsman Nicolas Sprimont in 1745. Sprimont was a silversmith from Liège who settled in London in about 1739. His mark was registered at Goldsmiths Hall in 1743 and the factory began production in 1745. The French jeweller Charles Gouyn was Sprimont’s partner in the enterprise but left in 1748 to set up a rival venture.

The site of Sprimont’s porcelain works on Lawrence Street was near Ranelagh Gardens, a pleasure garden where wealthy Londoners could find amusements and refreshments. It’s possible that Sprimont hoped to capitalise on this location to attract wealthy customers.

The high quality of the pieces attracted international customers and dealers. The manufactory also received a royal commission in 1764 by George III for a dinner and dessert service known as the Mecklenburg service which was to be gifted to his brother-in-law, Adolphus Frederick IV, Duke of Mecklenburg-Strelitz.

Like its founders, the factory’s employees were mostly of French and Flemish origin. A memorial by the ‘undertaker of Chelsea porcelain’ written after 1752 notes that the manufactory employed 100 workers at that time. In this period the manufactory used a red anchor to mark its wares, and it is thought as one of the factory’s best periods in terms of the quality of its wares.

The factories used different techniques for forming objects and experimented with clay composition to produce soft-paste porcelain. Over the years their recipes were improved to emulate the translucent, non-porous, white appearance of Chinese porcelain and improve the strength and durability of the material. Glazes were also applied to give the wares the white tint that was so admired.

Bow was the first manufactory to incorporate a high percentage of animal bone ash to produce its soft-paste porcelain (also called bone china), which reinforced the strength and durability of the wares. There are some references in its early history to the importation of clay from North Carolina by Andrew Duché, an American potter, which was found to be similar to the high kaolin composition of Chinese clay. Duché imported 20 tons of clay to England between 1743-1744 and it is probable that George Arnold financed Duché to acquire the lands containing china-clay in the Cherokee territory. Duché had a humble background and this enterprise made his fortune. He returned to live in Philadelphia and continued to supply Bow, and later Josiah Wedgwood’s manufactory with Cherokee clay.

Bow used the press-moulding technique which resulted in thickly potted objects that were less likely to capture fine detail than the slip-casting method used at Chelsea. Slip-cast wares resulted in slightly more refined objects with thinner walls. This method involved pouring ‘slip’ (liquefied clay) into a mould and building up its layers as it dried to reach the desired thickness. Once the slip had dried the mould was released.

In contrast, Chelsea produced a soft-paste porcelain consisting of white non-fusible clay combined with powdered glass (frit). From 1749, tin oxide was added to the clay which gave the final result a milky-white appearance. Just under ten years later, the factory began to incorporate animal bone ash into the clay (as was the practice at Bow), producing a more stable paste.

Throughout their production, both manufactories copied the fashions of continental porcelain, alongside imitating the enduringly popular Chinese ceramics imported by the EIC. In the 1740s and 1750s the chinoiserie motifs of the Dresden-based Meissen manufactory were an important influence. However towards the end of the 1750s, Sèvres pieces became increasingly fashionable. The Rococo style – characterised by natural forms and figures that were perched on high bases, decorated with scrolls and foliage called ‘bocage’ – dominated fashions in decorative arts. Alongside these trends, the English manufactories developed some distinctive designs created to appeal to the English public.

Early Chelsea pieces were influenced by Sprimont’s silverwares, resembling the repoussé decoration used to create forms in relief and sculptural features on silver vessels. In 1750 talented Flemish sculptor Joseph Willems joined Chelsea, and produced models in clay or wax from which a number of the factory’s popular figures were produced. As the factory began using strong enamel colours, it produced a series depicting figures from Aesop’s Fables, painted by Jeffryes Hamett who later worked at Worcester.

A range of original designs began to be produced from 1758 featuring paintings of botanical specimens and can be seen in Chitra Collection teapot CCN 1097. These decorative schemes were known as ‘Sir Hans Sloane’ as they were thought to be inspired by plants of the Chelsea Physick Garden that Sloane helped to found. However, the original engravings were largely by Georg Dionysius Ehret, published by Philip Miller. With the growing influence of Sèvres porcelain, Chelsea began creating pieces with coloured grounds in the 1760s, a feature that can be seen in the cup and saucer CCN 638.  It showcases the dotted pointillé ground which was fashionable in France from the late 1760s to the 1780s, while the imitation antique cameos and foliate garlands indicate the transition to the neo-classical style.

Bow produced blue and white tableware (such as CCN 1011) throughout its existence, often copying designs directly from Chinese examples. Decorative painting in underglaze blue was one of the cheapest forms of decoration as it was able to withstand high temperatures in the kiln. This use of cheaper materials and low-cost decoration allowed Bow to cater to a middle-class clientele and compete with the export porcelain also being sold on the market.

Blanc de chine or ‘white of China’ wares were another important influence on Bow’s output, especially in the early years of production when few enamel paints were used, as can be seen in CCN 1418. Although Bow’s examples are creamier in colour to those produced in the Dehua kilns, they are decorated with flowering prunus branches inspired by Chinese examples which became were a speciality of the factory. In addition, the manufactory created original designs for figures to appeal to Londoners. The famous London actors Kitty Clive and Henry Woodward as the Fine Lady and Fine Gentleman in David Garrick’s play Lethe were popular pieces, as was the figure of the Thames Waterman, popular statesmen, and generals.

William Duesbury, a porcelain enameller and founder of the Royal Crown Derby porcelain works, acquired both manufactories in succession as they began to decline. In 1769, as the health of Nicolas Sprimont weakened, Chelsea was sold to first to jeweller James Cox, and then to Duesbury in 1770. From 1769 to 1783 (known as the Chelsea-Derby period) decoration became increasingly classical, a more restrained style than florid rococo designs that had been seen until then. Sprimont died in 1771 and under Duesbury’s direction the factory was used mainly as a decorating establishment. It finally closed in 1783 and its moulds, patterns, and employees transferred to Derby.

Bow closed its doors in 1774 for uncertain reasons, but it has been suggested that it failed to keep up with fashion after 1760, continuing to produce pieces in the Rococo style. In 1776 Duesbury acquired Bow. The New Canton building ended its porcelain production and started producing ‘turpentine and small tenements’.

With pieces that are highly coveted worldwide today, the London porcelain manufactories are a crucial part of the history of ceramics in Britain. As porcelain production spread through Europe, these manufactories demonstrate how commercial ventures were set up without a Royal charter, to produce decorative objects and ‘useful’ tablewares on a large scale to furnish the homes of a growing number of consumers. Their testing of materials and techniques contributed to the establishment of a thriving porcelain industry in England. 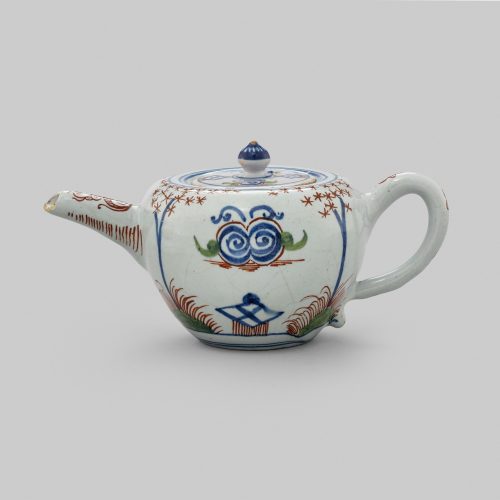 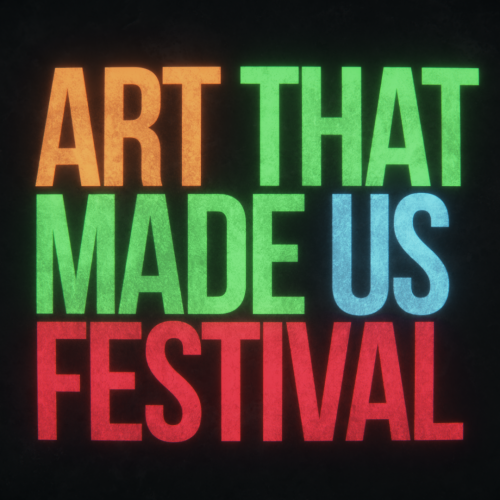 
ART THAT MADE US: THE INFLUENCE OF TEA IN ART 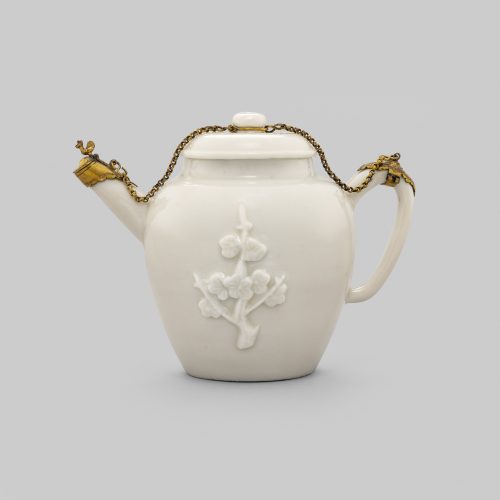