This teaspoon is decorated with clear multi-coloured enamels with a technique known as plique-à-jour, that was popular in France in the 1860s and in Norway and Russia at the turn of the 20th century. In 1890 there were four workshops in Europe specialising in the technique, three of which were in Norway. The metal support was either a prepared wire frame, or a metal object that was pierced multiple times to create minute spaces. Ground glass and iron oxides were then applied within these spaces, and fused to the metal at high temperatures. This produced a translucent effect similar to stained glass, with the name plique-à-jour translating as ‘open to daylight’. Western European enamellers often used foil as a temporary support during firing, as the lack of metal backing made the fusing process very difficult with a high failure rate.

The foliate design of this example is typical of the Art Nouveau movement, also known as the National Romantic Movement in the Nordic countries, characterised by organic naturalistic shapes and motifs. 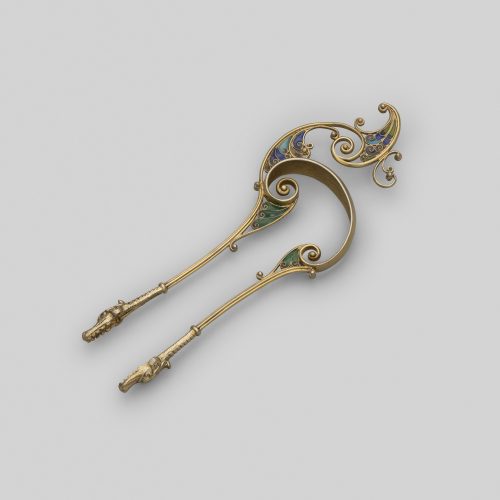