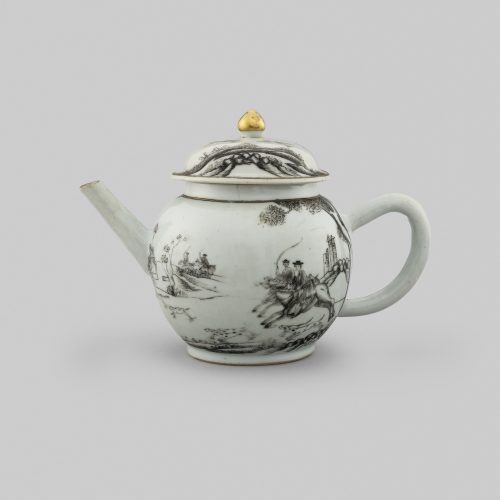 This Chinese export porcelain teapot is decorated with fine grisaille scenes. En grisaille refers to a style of monochromatic painting in shades of grey, used especially for the depiction of relief sculpture or for preparatory underpainting. A technique used in Europe since the 12th century, it was adopted around 1730 by Chinese ceramic painters decorating white porcelain wares with black line painting. As these porcelain wares were intended for export to the Western market, Chinese painters often copied scenes from European engravings and copper plate prints obtained from European merchants and missionaries.

Hunting was a pursuit favoured by the aristocracy across Europe and was a popular subject matter for decorative schemes in the 18th century. The fox hunt depicted on this example has been adapted from European engravings, most probably those by Thomas Burford (1710-1774), whose series of fox hunting engravings were based on the work of the earliest English sporting artist James Seymour. They are an early depiction of the genre, published in London in 1750, with several reissues throughout the 18th century signifying their popularity. The exact print remains unidentified however as Chinese enamellers would often alter the scenes to appeal to the Western market who wanted a unique piece.